Anterior Cingulotomy (ACING) was initially developed for the treatment of intractable pain (Foltz & White, 1962), but its other indications include anxiety disorders, depressive disorders, and OCD. In recent years, it has become one of the most commonly-used neurosurgical procedures for the treatment of chronic, treatment-refractory depression and OCD.

The targets for cingulotomy are the supracallosal fibres of the cingulum bundle (part of the Papez circuit) as it travels through the anterior cingulate gyrus. The lesion procedure also results in damage to a localised area of anterior cingulate cortex. The lesion targets (in red) are shown below in Figure 1. 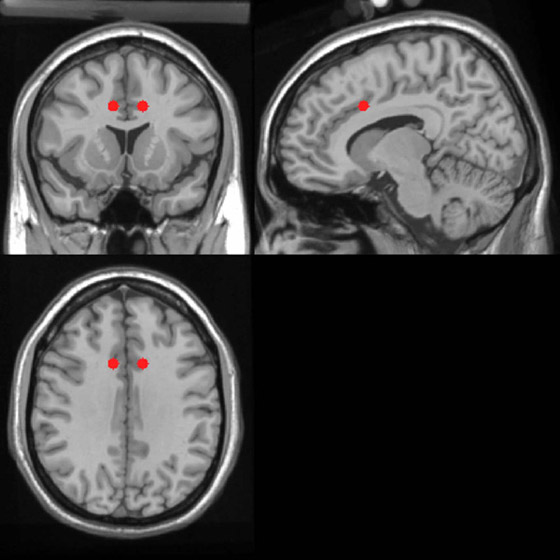 ACING takes place under general anaesthesia. A stereotactic frame ring is fixed to the skull before a volumetric CT and MRI scan is performed. The CT and MRI images are then imported into planning software specific to the stereotactic frame. Fixed points within the brain are localised to adjust the stereotactic cube in order to overcome any tilt, yaw, or rotation of the brain within the frame. Once the targets are identified, the software automatically calculates the frame coordinates.

Two small incisions are made 2.5cm from the midline and just anterior to the coronal suture. A six-millimetre tip radiofrequency lesion generator probe is then inserted to the previously-located target and the lesion is created by heating the probe to 70º Celsius for 90 seconds.

The targets are 7 mm lateral to midline, 20 mm posterior to anterior portion of frontal horn, and 1 mm above the roof of the lateral ventricles. The intended lesion has a diameter of 8-9mm.